Sham Shui Po is a relatively large district in Hong Kong. When streets were not very busy in the old days, residents liked cycling for daily transport. Labours in the area also used bicycles to deliver goods. Bicycle was a common means of transportation in the neighborhood. Yet, hustle and bustle streets today can no longer accommodate cycling activities. Kung Chan Cycle on Ki Lung Street has been witnessing the changes in Sham Shui Po over the past 60 years. The 60-year shop has become one major attraction on the street with its walls covered with bicycle parts and the side lane with bicycles waiting to be repaired.

Kung Chan Cycle is the lifeblood of owner, Mr. Wu. A traffic accident after the end of the war made Mr. Wu realized that bicycle could be a daily transportation. He then started his business for bicycles retailing and repairing while he was 16 or 17 years old. Mr. Wu didn’t have a master to train him. He learned his skills from observing how others operated their business. Equipped with his expertise through explorations and practices, Mr. Wu became a bicycle repair master and carried on in the industry for 60 years. Recalling from his memory, Mr. Wu mentioned that people were relatively poor at that time and resources were rare. Bicycle parts for maintenance were often taken from old used bicycles from abroad. Nowadays, bicycle parts are usually imported from Japan, Taiwan and China. Among them, those from Japan are with the best quality. The price has gone up a lot after the Tsunami in Japan though. Now, Mr. Wu is getting old, so he is passing down Kung Chan Cycle to his children.

The recent trend of bicycle craze makes cycling popular again. Shop assistant, Winnie told us that there were not many “street cars” (professional bicycles used on the roads) back in the 1990s. Therefore, Kung Chan Cycle mainly catered for the neighborhood, especially for bicycles that were used to deliver goods to and from nearby markets. But the trend in the recent 4 or 5 years has changed the customer base of the business. More and more young people come for bicycle maintenance. Some customers are from other districts, from Kowloon City to Yuen Long in the New Territories. Almost everyone in the bike circle has heard of Kung Chan Cycle. According to Winnie, their reasonable price, good attitude and services, all contributed to Kung Chan Cycle’s good reputation.

The efficiency in using the shop space provided a platform for repairing bicycles and also communication with clients. 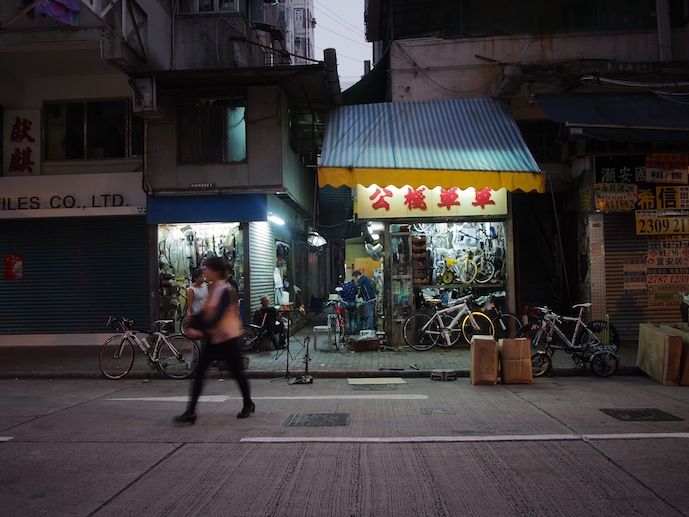 Night time is another peak hours for repairing the bikes.