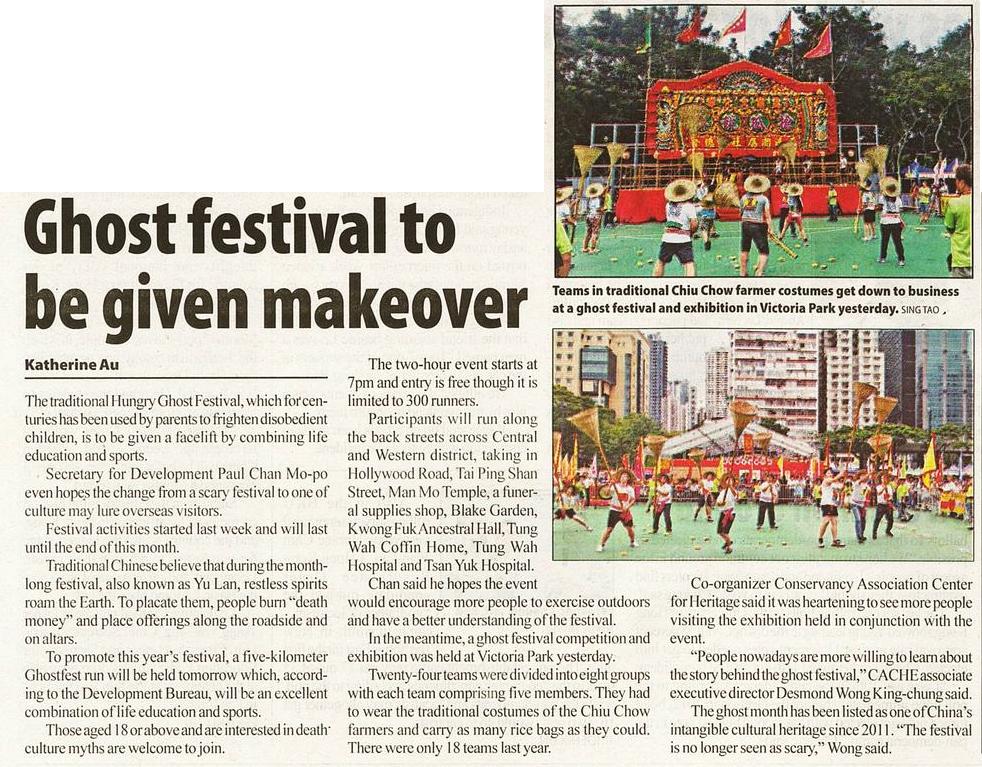 Ghost festival to be given makeover

The traditional Hungry Ghost Festival, which for centuries has been used by parents to frighten disobedient children, is to be given a facelift by combining life education and sports.
Secretary for Development Paul Chan Mo-po even hopes the change from a scary festival to one of culture may lure overseas visitors.
Festival activities started last week and will last until the end of this month.
Traditional Chinese believe that during the month-long festival, also known as Yu Lan, restless spirits roam the Earth. To placate them, people burn “death money” and place offerings along the roadside and on altars.
To promote this year’s festival, a five-kilometer Ghostfest run will be held tomorrow which, according to the Development Bureau, will be an excellent combination of life education and sports.
Those aged 18 or above and are interested in death culture myths are welcome to join.
The two-hour event starts at 7pm and entry is free though it is limited to 300 runners.
Participants will run along the back streets across Central and Western district, taking in Hollywood Road, Tai Ping Shan Street, Man Mo Temple, a funeral supplies shop, Blake Garden, Kwong Fuk Ancestral Hall, Tung Wah Coffin Home, Tung Wah Hospital and Tsan Yuk Hospital.
Chan said he hopes the event would encourage more people to exercise outdoors and have a better understanding of the festival.
In the meantime, a ghost festival competition and exhibition was held at Victoria Park yesterday.
Twenty-four teams were divided into eight groups with each team comprising five members. They had to wear the traditional costumes of the Chiu Chow farmers and carry as many rice bags as they could. There were only 18 teams last year.
Co-organizer Conservancy Association Center for Heritage said it was heartening to see more people visiting the exhibition held in conjunction with the event.
“People nowadays are more willing to learn about the story behind the ghost festival,” CACHE associate executive director Desmond Wong King-chung said.
The ghost month has been listed as one of China’s intangible cultural heritage since 2011. “The festival is no longer seen as scary,” Wong said.